*Primary Progressive Aphasia, a degeneration of the part of the brain that affects speech.

When Tommy returned from his trip to Walgreens, he was  carrying a plastic bag that appeared to contain more than the Triple A batteries he had gone to purchase. From the square shape of the box within, I thought it to be golf balls.

“What did you get?” I asked. I was teasing, for no matter how many dozens he has stored on basement shelves, I don’t mind him adding to his collection.

My husband smiled and entered the house, leaving me on the porch where I had stationed myself to enjoy a beautiful Saturday afternoon. But after spilling coffee on a garden chair, I left my spot to get clean-up equipment.

I spotted the square box on the kitchen counter. Instead of a package of golf balls as I had guessed, the box was yellow trimmed in gold and decorated with the familiar red flowers, green border, and the words “Whitman's Milk Chocolates Sampler” in green script. A yellow envelope addressed to me was laid next to it. I opened the card that read, “Happy Birthday from the Group!”

“Thank you, Sweetheart!” I called out as I searched for Tommy. I found him installing the new batteries into his headphones, and acting as if there was no surprise waiting for me.

“I love the card and the chocolates!” I said as I pulled him from his task.

My husband’s eyes moistened. He placed the Triple A’s and headphones on the counter and bent down to accept my kiss. Then, he picked up his equipment and returned, smiling, to finish his job.

Although my birthday was the previous week, and “from the Group” was a bit off base, I was thrilled to receive both the card and the gift. Tommy had remembered after all. I know he chose this particular card, rather than a more appropriate, “To My Wife,” because at Walgreens he didn’t have with him his reading glasses, and this card’s “Happy Birthday” was large, colorful, and easy-to-spot. He didn’t sign it, but no matter. I knew the identity of my my gift giver.

On August 10, the morning of my actual birthday, when the kitchen counter was vacant of card or chocolates, I wasn’t hurt or angry. I knew if my husband could have pulled it together, he would have. On past birthdays, I could count on a sentimental “To My Wife” card and bouquet of flowers greeting me in the morning. But since Tommy no longer drives, I realized that would have been difficult.

I’m certain he knew the actual date because phone calls wishing me "Happy Birthday" started early that morning and cards that arrived in the mail were displayed on our dining room table, along with a basket of treats my daughters had sent.

Because I thought his lapse on my special day was due to his inability to purchase something on his own, I had an idea. When his Friday driver, Stuart, came to pick up Tommy, I made this suggestion: “There’s a Hallmark’s next to the coffee shop where you get Tommy,” I said. “Tell him you saw on Facebook that it was my birthday and would he like to stop in and get a card.”

“No problem,” Stuart said. But when the two arrived home and my husband led the way inside with only his gym bag, I looked at Stuart for clues. “I asked him,” he whispered to me, “but he made it clear he wanted to go straight home.”

Since Walgreens is only a block from our house and Tommy’s language problems don’t prevent him from making an off the shelf purchase, he could have bought the card and chocolates on my actual birthday. And Stuart did give him the option to buy something that same day. My husband chose neither.

I have a theory as to why he picked today -- eight days after the fact. I believe he wanted to separate himself from the crowd -- make his gift and card more special than the rest. He wanted to let me know he cared more for me than anyone else, more than the first-thing-in-the-morning well wishers or card and gift senders.

Anyway, that’s what I think. It doesn’t really matter. The greeting card “From the Group” is propped on its own on the dining room table, and every bite of candy feels like love.

Posted by Elaine Soloway at 6:09 AM No comments:

The Kids Are All Right 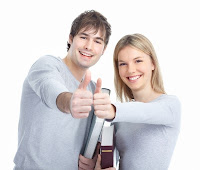 Tommy and I have just expanded our family: a boy and a girl. They arrived not as bundles from heaven, but in a Jeep and on a bicycle. In truth, they are young adult companions for my husband -- miracles of referrals rather than biology or science -- who I’ve hired to give me respite from ‘round-the-clock caregiving.

I do have flesh-and-blood daughters. But since they live on either coast, they can’t be at our beck-and-call. As for Tommy, he entered this second marriage sans children; hence my designation of this new adopted duo as “our kids.”

Before our boy Stuart came for his first assignment, I prepped my husband. Unlike the cinematic moment: “Darling, I have wonderful news. You’re going to be a father,” my revelation went something like this: “Honey,” I said, “I’ve hired a young man who will take over driving you to the Y one day a week. He’s a CNA, that’s Certified Nursing Assistant, so he can also help out when I have my hip replacement surgery.”

Well, okay, I fudged a bit. Stuart’s medical credentials are important for Tommy’s condition, but I hesitate reminding my husband of his special needs. I can take the fall  -- metaphorically of course because of the hip thing -- as I really do see our boy being helpful when I’m shouting for my crutches.

After Tommy gave the plan two thumbs up, I gave Stuart this checklist: “Before you leave the house, be sure Tommy takes his reading glasses, cellphone, gym bag, and that he’s wearing his dental bridge, baseball cap, and gym shoes.” Stuart -- using an impressive two thumbs entry -- recorded it all on his iPhone, immediately winning me over with the product and the pace.

Tommy and Stuart were due back between 11:45 and noon. After a sublime four hours to myself, I returned home to await their arrival. At 11:40 I stationed myself at our picture window and watched as each car turned the corner into our street. At exactly 11:45, a black Jeep entered my view.

“Everything was fine,” Stuart said as Tommy walked into the house with two thumbs raised. “He was all set when I arrived, everything on the checklist completed.” I felt as proud of them as if they had just aced their ACTs.

Our girl Kristen had been engaged to be my husband’s companion one afternoon a week. Her task is to follow him as he rides his bicycle to a park about a mile away, and then circles the grounds four times before heading back home. Ever since Tommy returned from a ride with an unexplained bruise on his leg, I’ve worried about his safety.

For her first shift, Kristen rolled up to our house outfitted in a gingham summer dress over bike shorts. She wore a helmet; and slung across her body, an enormous leather purse, which I later insisted she forgo in favor of one of my archived backpacks.

I had told Tommy about Kristen’s arrival, and again employed the hip excuse. “I won’t be able to drive for at least four weeks,” I said. “Kristen can keep you company on bike rides, or use our car to take you to the putting green, golf store, or wherever you want to go.”

But I needn’t have dissembled because the moment Kristen -- who is an actress -- removed her helmet, shook out her hair, and smiled, my husband rushed to the garage to get his bike. While this duo was on their ride, I once again peeked at my iPhone willing away any text messages. Gratefully, as with her faux sibling, none arrived. And in a little over an hour from the time they left, the two returned.

“It was fine,” she said. “I followed behind him [they use sidewalks] and alerted people as we approached. We stopped for water, then headed home.”

Tommy, his face moist and smiling, gave her two thumbs up as he headed for the couch. Before she left, Kristen went to where Tommy was prone to say goodbye. Instead of shaking his hand, she dotted his damp forehead with a kiss.

Perhaps our kids are heaven-sent after all.

Elaine Soloway
This blog is brought to you by Elaine Soloway Consulting, offering services in Public Relations, Coaching, and Technology. Check out my website, www.elainesoloway.com, for more information and my latest blog posts.